A modular monitoring application monitoring services, e.g., Jenkins, Sonar, … with different notifiers. One of which can be our Status Light with Raspberry Pi Zero and W2812 Led Strip we did last time.

The idea of building a monitor application came from a colleague, who was using a similar application connected to a Blink1 light. The one LED USB dongle seem too expensive to me so I thought I will build something bigger 🙂

The core of the application is made up from Data, API, Control and UI modules. The Data module simply contains the different POJOs, e.g., Config, Status, Priority. The API module contains interface logic, e.g., Module, ServiceModule, NotifierModule. The Control module puts the things together and the UI module contains some UI specific stuff for modules which want to use UI. 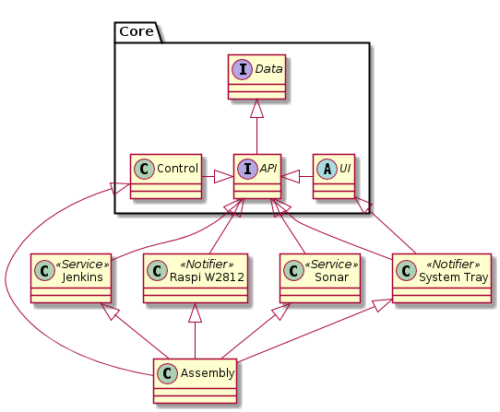 The Raspi W2812 module connects to our light, we developed last time, via USB and changes the light pattern, color, etc.

Everything revolves around a StatusItem in the Data module. Service modules have to translate the state of their services to it and send a list of such entities to the Controller who stores them in a list (one StatusItem per Item). An Item is, e.g., a Jenkins Job or a Sonar Project. The Priority is taken from the configuration where you can set a default Priority for a whole Service and per each Service item.

Every time the collection of StatusItems changes the Notifier modules get notified. Depending on their capability they can display them. So for example the System Tray module can display only one StatusItem so it chooses the one with the worst Status. Our Raspi W2812 module chooses a collection of StatusItems with the worst Status and highest Priority. Then it rotates the corresponding light patterns and colors. 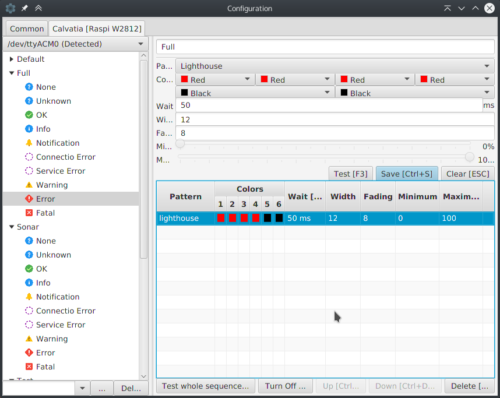 You can check out the code here: https://github.com/kubovy/monitor. If you build your light from the previous post its pretty cool

The Blink1 LED USB dongle could also be supported by this application, you would just need to program another Notifier module.